1. For the following five variables, identify the level at which it is measured (nominal, ordinal, interval, or ratio) and then whether it is a discrete or continuous variable.

Time on email – How many hours per week do you spend sending and answering emails? Life satisfaction – On the whole, are you very satisfied, fairly satisfied, not very satisfied, or not at all satisfied with the life you lead?

Marital status – Are you currently married, widowed, divorced, separated, or have you never been married?

2. Based on the following frequency distribution histogram for a set of 14 scores, analyse the shape of the distribution and justify your answer (3 marks). Describe the positions of the mode, median, and mean in the distribution (3 marks). Which of the three measures of central tendency would you recommend to use, and why? 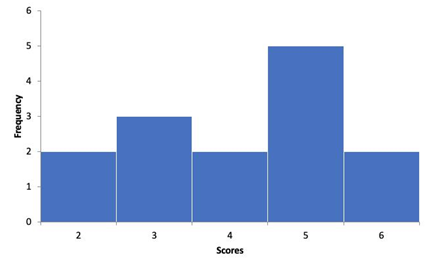 3. According to a 2016 study in Singapore, 12-year-olds spend 6.5 hours on electronic devices each day. Assuming that the distribution of screen time is normal with a standard deviation of = 2 hours, find each of the following proportions. You may apply the formulae below and may also find the unit normal table in your textbook helpful. z = (Χ-μ)/σ.

What proportion of 12-year-old children spend more than 8 hours on electronic devices each day?

What proportion of 12-year-old children spend less than 30 minutes a day on electronic devices?

A researcher wanted to know whether the average age at first marriage was higher for all married males versus all married females in Singapore. The means and standard deviations for a random sample of 392 married men and 610 married women (randomly selected from among all married adults in Singapore) are presented in the table below. Formulate the null and research hypotheses. Calculate the t-statistic, showing all the necessary calculations. Interpret the hypothesis testing results (use a = 0.01) and report your conclusion.

In the World Values Survey Wave 6 carried out by the Centre for Applied Research, SIM University in Singapore in 2012, a nationally representative sample of Singapore citizens aged 18 years or older were given a list of various groups of people. They were then asked to mention any group that they would not like to have as neighbors. The following table shows the frequency distribution of respondents of various age categories who mentioned or did not mention homosexuals.

Researcher K wants to understand if there is a correlation between GDP per capita and life expectancy at birth. She obtained data on these two variables as in the year 2017 for 233 countries from the World Bank.

2. Researcher K wishes to develop a linear equation to express the relationship between the two variables. She let GDP per capita by the independent variable and life expectancy at birth be the dependent variable. She then conducted regression analysis in Excel and the results are shown below.

Based on these results, write the regression equation for predicting life expectancy at birth (years) from GDP per capita (current US$).

For a country with a GDP per capita of US$ 60,000, estimate the life expectancy at birth.

3. Below is a scatter plot showing the data points K used in her study. 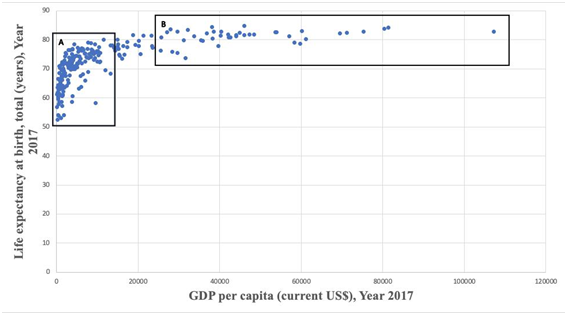 Examine the scatter plot and discuss whether the relationship between GDP per capita and life expectancy at birth is truly linear.

If the researcher restricts data points to the area within box A, how will the coefficient of correlation between GDP per capita and life expectancy at birth change? How will she then conclude about the relationship between the two?

If the researcher restricts data points to the area within box B, how will the coefficient of correlation between GDP per capita and life expectancy at birth change? How will she then conclude about the relationship between the two?

Get Help By Expert

If you are looking for the best sociology assignment help, you can contact us. We offer (SOC392) methods of data analysis: exploring behavioural sciences assignment help. If you are one who is searching on the web "do my assignment”, Singapore Assignment Help is the right choice for you. Our team of assignment experts works 24*7 on the services providing you with support in writing the homework or assignment.

Do you need help in writing Essay & Dissertation ?

No.1 AcademicWriting Services in Singapore